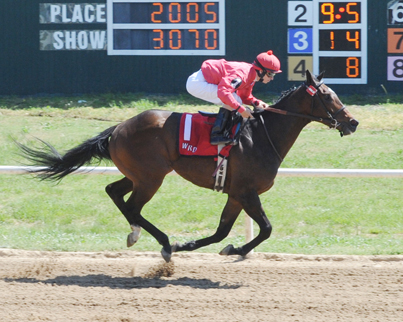 Shortly before California Chrome won the Kentucky Derby at Churchill Downs, a pair of Oklahoma-breds unleashed impressive performances in two divisions of the Oklahoma Stallion Stakes at Will Rogers Downs.

The $64,500 colts and geldings division went to Clark Brewster’s homebred Fesstune, who romped to a 14 ¾-length win as the 1-2 favorite. Ridden by Justin Shepherd for trainer Scott Young, the gelded son of Omega Code got the one-mile distance in 1:38.34. It marked the second straight win for Fesstune, who in April broke his maiden at Will Rogers by 5 ¾ lengths. His record now stands at 3-2-0-1 with earnings of $53,465. He became the ninth stakes winner sired by Omega Code, a Grade 3-winning Elusive Quality stallion who stands at Rockin’ Z Ranch in Beggs, Oklahoma.

In the $55,000 fillies division, 1-2 favorite Heykittykittykitty got up to win by a length in 1:39.40 with Jose Medina aboard for trainer Ron Moquett. Bred by Diamond G Ranch Inc. and owned by Westrock Stables LLC, the filly came in to Will Rogers off a starter allowance win at Oaklawn Park. This was her second Oklahoma Stallion Stakes win after winning a division in November at Remington Park. Her record now stands at 7-4-2-1 with a bankroll of $110,891. Her sire Tactical Cat, who formerly stood at Diamond G and now stands at Raywood Farm in Arcadia, Oklahoma, is closing in on $20 million in progeny earnings.