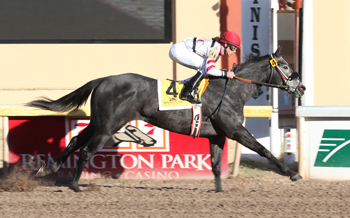 A pair of impressive winners came home alone in their respective divisions of the Oklahoma Stallion Stakes on Black Friday afternoon at Remington Park. Heykittykittykitty roared home an easy seven-length winner in the fillies division while Alpha and Omega scored by three lengths with a sharp burst into the stretch of the colts and geldings division. Both divisions for the Oklahoma Stallion Stakes were worth $55,000 for 2-year-olds.

Heykittykittykitty has suddenly developed after breaking her maiden in a claiming event at the $15,000 level and then chasing the very talented Beau Ravelle in her last start on Nov. 13, settling for a respectable second-place effort only 3 1/2 lengths behind the undefeated runner. Owned by Danny Caldwell of Poteau, Okla. and trained by Federico Villafranco, Heykittykittykitty was ridden by Jose Medina. She crossed the six-furlong finish in 1:11.98 over the fast track with plenty in reserve.

The heavy 3-10 wagering favorite, Heykittykittykitty came from just off the pace early to take over off the turn into the stretch and then drawing clear. She paid $2.60 to win, $2.10 to place and $2.10 to show. Big Sugar Racing’s Mama’s Mad Money, a daughter of Mighty Acres stallion Save Big Money who won the Iowa Stallion Futurity at Prairie Meadows earlier in the year, was along for second and returned $5.40 to place and $3.60 to show. Black Hawk Stables’ Aunt Sissy, by National Saint, was 4 1/4 lengths behind the runner-up, finishing third to pay $5 to show.

Bred in Oklahoma by the Diamond G Ranch, Heykittykittykitty has won two of her three career attempts, all here at Remington Park. The winner’s check of $33,000 moves her total earnings to $49,591. She is by the Oklahoma-based stallion Tactical Cat from the New Way mare Eternal. Tactical Cat, who formerly stood at Diamond G, now stands at Raywood Farm in Arcadia, Oklahoma.

Alpha And Omega left no doubt about his 1-10 closing odds when he left the gate in the $55,000 colts and geldings division and quickly darted to the lead. He then strolled home to a popular three-length win for owner and breeder Dr. Robert Zoellner of Tulsa, Okla.

Now with two wins in four starts, all at Remington Park, Alpha And Omega earned $33,000 for his victory, pushing his lifetime earnings to $77,217. He is a gelded son of the Omega Code, who stands at Zoellner’s Rockin’ Z Ranch.

Trained by Kari Craddock and ridden by Luis Quinonez, the extremely short-priced favorite paid $2.20 to win, $2.10 to place and $2.10 to show. J.C. Wells’ Here Comes Valdez, by leading Oklahoma freshman sire and JEH Stallion Station resident Mr. Nightlinger, stalked the pace and finished second as the 9-1 second-choice and paid $3.60 to place and $2.80 to show. 7 Cedars Farm and Georgie Stuart’s Black Alleycat, by Tactical Cat, ran third and paid $3.20 to show. Alpha And Omega covered the six furlongs in a time of 1:12.49.