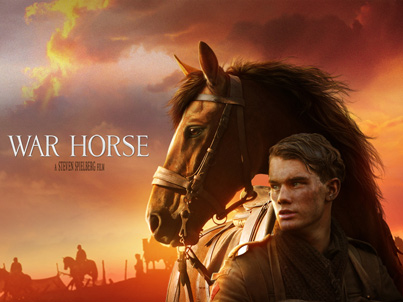 Selected during casting as one of the many young horses to play a role in the 2011 movie War Horse, 3-year-old Hollywood Extra will make his career racing debut on Thursday night at Remington Park.

Owned and bred in Oklahoma by the Larry and Nelda Kettles Living Trust of Guthrie, Okla., Hollywood Extra caught the eye of talent scouts in 2011 when he was just three weeks old, well before he had been named by the Kettles. Since he looked the part for a young ‘Joey,’ the equine star in the movie directed by Steven Spielberg, Hollywood Extra was off to southern California.

Over three years later, Hollywood Extra is set for his career debut at Remington Park. He’ll face nine other Oklahoma-bred maidens in the fifth race on Thursday at approximately 8:52pm-Central. Trained by Carlos “Charley” Padilla, Hollywood Extra will be ridden by Garrett Steinberg. The gelding by Indy Thunder from the Our Emblem mare Timeforamakeover has been working well for his first racing attempt.