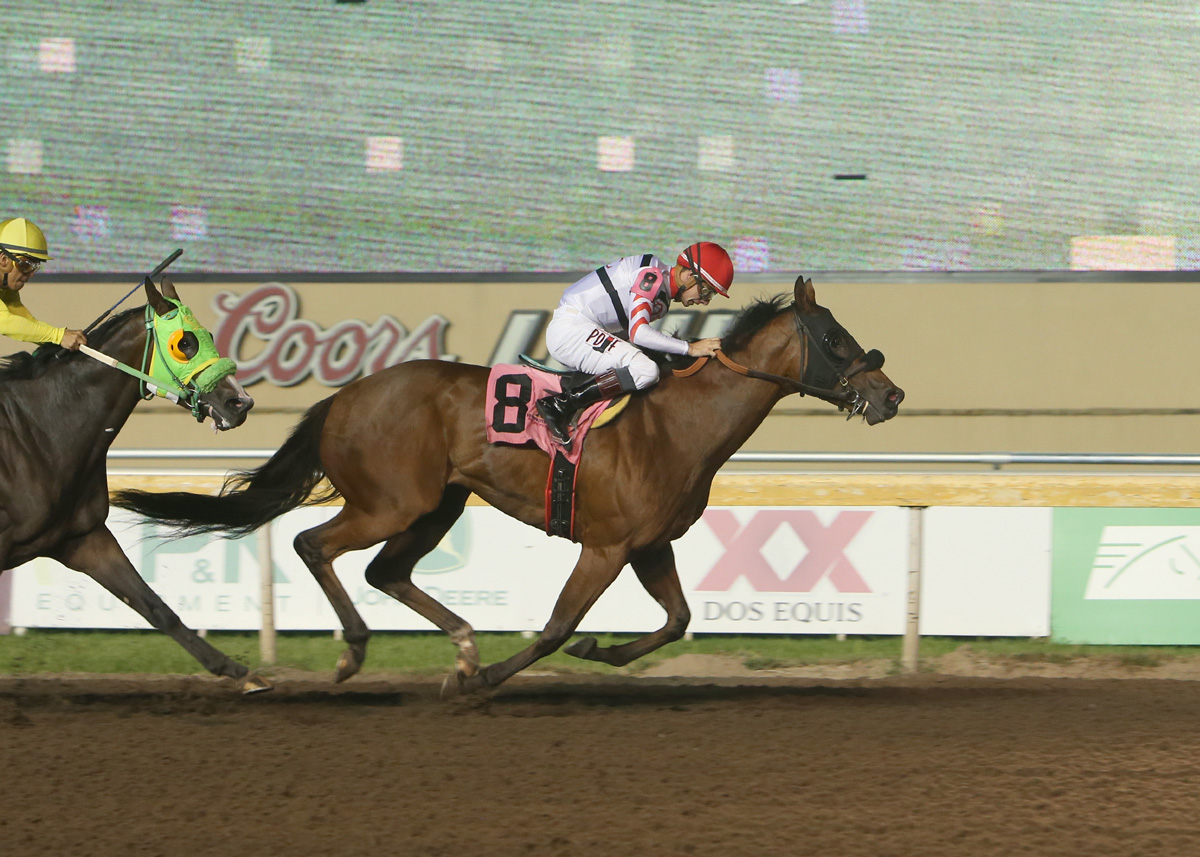 Caldwell, a Poteau, Okla., resident, graduated from Northeastern State University in Tahlequah, and went into coaching. He stayed in that occupation for 13 years and toward the end of that career, he began prospecting in the horse racing business, claiming a few Quarter Horses. His new livelihood didn’t bloom as an owner until he and his brother collaborated in a natural stone business. He finally was making enough money to turn to thoroughbreds and began claiming that breed in 2007 at Churchill Downs in Louisville, Ky.

Caldwell’s first win at Remington Park came on Sept. 7, 2008, when Sir Magic Man won a 6-furlongs sprint for $4,000 claiming 3-year-olds and older, Oklahoma-breds, according to Equibase stats. Sir Magic Man won by 3-1/2 lengths at 9-5 odds with Tommy Page as the trainer and Floyd Wethey, Jr., in the saddle.

It seems appropriate that Heza Freak was his 400th winner at Remington because he wins almost freakishly often at his home track. This 3-year-old gelded son of Den’s Legacy, out of the Siphon (BRZ) mare Gracinha, took 12 starts to finally break through as a winner, but he won by a full length at 2-1 odds, rallying from off the pace under Weston Hamilton. He covered the 5-1/2 furlongs in 1:06.02 on the fast track and worked his way from fifth to first as he followed early fractions of :22.67 seconds for the first quarter-mile, :46.54 for the half-mile and :59.23 for five-eighths of a mile. Heza Freak, bred in Oklahoma by Center Hills Farm and Rendell Saddler, was sent off as the 2-1 second betting favorite.

The 4-year-old colt, Senor Buscador, winner of the 2020 Springboard Mile at Remington Park, ran a competitive third as the third-longest shot on the board in the Grade 2, $250,000 Pat O’Brien Stakes at Del Mar just outside San Diego on Saturday.

Just like he did in the Springboard Mile two years ago, the son of Mineshaft, out of the Desert God mare Rose’s Desert, came from dead last to make one big run in the Pat O’Brien Stakes race at 7 furlongs. He was 30-1 in the morning line, but was bet down to 21-1 by post-time despite drifting up to 50-1 at times during the early betting.

Senor Buscador came down the stretch like he was shot out of a cannon, just like in the Springboard, but he couldn’t get past the final two horses and settled for third. He won the Springboard in 2020 by 5-3/4 lengths but finished 4-1/2 lengths behind victor Laurel River in the Pat O’Brien. He did finish 1-1/4 lengths in front of fourth-place finisher Speaker’s Corner, who was the prohibitive even-money favorite in the race.

Owner Joe R. Peacock, Jr., and trainer Todd Fincher had to be proud of the way Senor Buscador ran after dealing with injuries most of his early career. Jockey Edwin Maldonado was aboard. He was bred in Kentucky by Joe Peacock Sr. and Joe Peacock Jr.

Senor Buscador earned $30,000 for his third-place finish and now has started six times in his career, winning three of those and running third once for earnings of $196,327.