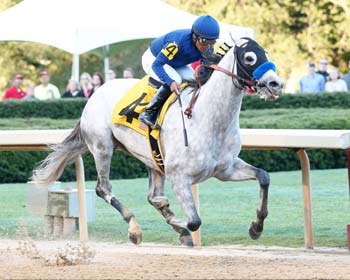 One year after winning the Rebel Stakes with eventual Triple Crown winner American Pharoah, Hall of Fame trainer Bob Baffert finally returned to Oaklawn with the right horse after two unsuccessful trips earlier this season and won the $900,000 race with Coolmore’s Cupid. Overall, it was Baffert’s sixth victory in the race since 2010. His other winners were champion Lookin at Lucky, Secret Circle, The Factor and Hoppertunity.

Using his inside post position to his advantage, Cupid went to the front right from the start and proceed to lead his 13 other rivals through fractions of :22 4/5 and :46 4/5 while being tracked by Siding Spring and Madtap. Jockey Martin Garcia was able to give Cupid a breather into the far turn and it allowed him to keep just enough in reserve to hold off Whitmore to win by 1 ¼ lengths in a final time of 1:43 4/5 for 1 1/16 miles over a fast track. Creator, who like Cupid is a gray son of Tapit, came on willingly for third.

“I am so happy that he ran so well, especially for Martin,” said Baffert by phone. “He works so hard getting these horses ready and he got the win. I’m happy for the Coolmore (owners) gang, too. I knew going in he was a nice horse. But he never had been tested and that was a pretty strong bunch. That was like the Tapit Rebel.

“We got a little beat up that last couple of times we were at Oaklawn (this year). The last time we went there Jimmy said they were booing him. We kept throwing 3-year-olds at them and we finally found the right one. I’m just very happy.”

Cupid, who just broke his maiden Feb. 7, was winning for the second straight time in his fourth career start. He has now earned $587,500. He also jumps into fourth in the Kentucky Derby points standing after receiving 50 points for his victory. Whitmore is now 10th with 24 points after finishing second in the Rebel and Southwest Stakes.

Suddenbreakingnews, who earned 10 points by winning the Southwest, and Discreetness, who has 10 points from his victory in the Smarty Jones, are sitting at #25 and #27, respectively and would need a top four performance in the $1,000,000 Arkansas Derby April 16 to advance on to Churchill. The Arkansas Derby offers a 170 total points with 100 points to the winner.