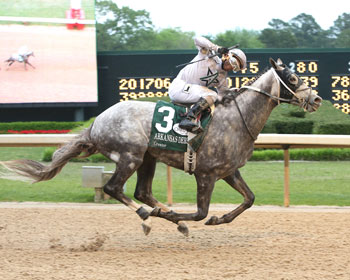 WinStar Farm’s Creator powered home from dead last in the field of 12 to pull off an upset in the 80th edition of the $1 million (G1) Arkansas Derby at Oaklawn in front of 65,000 people on-track Saturday, and in the process the colt created a guaranteed spot for himself in the Kentucky Derby.

The 3-year-old gray or roan son of Tapit had earned just 10 qualifying Kentucky Derby points by virtue of his third place finish last out in the $900,000 (G2) Rebel Stakes here March 19, but he now has a total of 110 marks courtesy of the 100 points awarded for finishing first in the Arkansas Derby.

Conditioned by Steve Asmussen and ridden patiently by Ricardo Santana, Jr., who finished the 2016 meet Saturday as the leading trainer and jockey, respectively, once again, Creator showed no speed in the early going as the Todd Pletcher-trained Gettysburg reeled off fractions of :22.4, :46. 1 and 1:10.3 under John Velazquez. WinStar Farm’s Gettsburg was pressed by 4-5 favorite Cupid, who won the Rebel Stakes for Bob Baffert, as they entered the final turn.

As Gettysburg weakened in the lane, Martin Garcia asked Cupid but he came up empty and faded badly to finish far back in 10th. While the front runners were folding their tents, Creator, Suddenbreakingnews and Whitmore were all staging their late rallies and closing fast.

Creator, dispatched at 11.60-1, traveled the 1 1/8 miles in 1:50.1 on a fast track to cross under their wire 1 1/4 lengths in front of The Donnie K Von Hemel-trained Suddenbreakingnews, who was piloted by Luis Quinonez. Whitmore, who is trained by Ron Moquett and was ridden by Irad Ortiz. Jr., was another 1 1/4 lengths back. Dazzling Gem, trained by Brad Cox with Joe Talamo in the irons, was fourth.
Suddenbreakingnews earned 40 points to up his total to 50 and Whitmore gained 20 more for 44 in all, thus assuring themselves one of the 20 Kentucky Derby berths. With the 10 points he earned for finishing fourth added to the 20 he already had, Dazzling Gem’s connections find themselves on the outside looking in in 25th place.

But the spotlight Saturday was on Creator, who had taken six tries to graduate from the maiden ranks and now holds the status of a Grade 1 winner.

“I am very proud of the outcome today,” said Asmussen, who was honored on the meet’s closing day with his seventh Oaklawn training tittle since 2007 and is now the third all-time leading trainer here. “Ricardo has a ton of confidence in this horse and I’m glad to see him rewarded for how much he believed in this horse.”

Von Hemel survived some nerve-wracking moments before seeing his charge, the winner of the (G3) Southwest Stakes and a prep for the Arkansas Derby, kick in late.

“I was concerned in the far turn that he was going nowhere, and struggling a little bit. I was wondering if he was even going to fire at all. Finally, when he got straightened out down the lane, he did come with his move. It sure looks like more ground is better for us,” he said.

The same may be said for Whitmore as he advanced to Churchill Downs and the 1 1/4 mile distance of the Run for the Roses.

“We belong in the Kentucky Derby,” said Moquett. “It’s what I said before the race, whoever got the best trip would win. Today, Ricardo Santana, Creator and Steve Asmussen got the better trip. Whitmore is not a ‘hanger’ or any of that stuff. He keeps overcoming every race.”

Cupid could not overcome a less than ideal trip and the connections of Coolmore’s colt were understandably disappointed.

Said Jimmy Barnes, the assistant to Baffert: “We were done early, basically. I think the fractions probably took a toll on us. But that’s racing. I know Martin wanted to get him in the clear, which he did. But unfortunately, he got in the clear and they were rolling right along.”

Nonetheless, Cupid had already acquired enough points to move on to the Kentucky Derby with 50 and sits in 13th place on the leader board. Although Dazzling Gem is in the 25th spot, Cox will take him to Kentucky.

“What do we get? Ten points? I was very pleased with the race. Joe (Talamo) kind of chased them a little bit going to the backside. It was a good ride, he moved him around the turn, had all opportunity to run down the lane and run a good race. We’ll see how he comes out of it,” said Cox.

Creator, who is out of the Privately Held mare Morena, was bred by Mt. Brilliant Broodmares LLC in Kentucky and was a $440,000 purchase at the Keeneland September Yearling sale in 2012. With his Arkansas Derby win, he improved to 2-4-1 in eight starts and has earned $768,320.