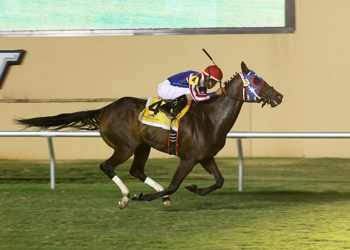 Recent racing attempts were troubling experiences for Cougar Ridge. Saturday night at Remington Park, the 5-year-old gelding put his troubles behind him, avoiding issues and rolling to a four-length win in the $75,000 Edward J. DeBartolo Memorial Handicap.

Owned by Richard Bahde of Omaha, Neb. and trained by Randy Morse, Cougar Ridge was ridden by C.J. McMahon. Cougar Ridge had problems of some sort in his last two attempts before coming to Oklahoma City. He was forced to steady in traffic in an allowance race at Indiana Grand on Aug. 8. Prior to that, he was also steadied in traffic in an allowance event at Churchill Downs in June.

McMahon received his instructions from Morse on race strategy and the plan worked perfectly, with no hindrance from any of the other five rivals taking place.

“I had a wonderful trip, he left good. Mr. Randy (trainer Morse) told me to just sit him behind horses until it was time to go and I just did that,” McMahon said. “Coming toward the turn for home he started getting a little aggressive so I had to wait until something opened up. When it did he just burst into it and ran his race.”

Cougar Ridge sat in third position for the first three-quarters of a mile in the 1-1/16 miles DeBartolo over the turf. Once straightening away in the stretch, he was able to get around the pace-setting Ecleto Red and then power to victory. Fly The Red Eye rallied for second while Ecleto Red held on for a third-place finish.

The DeBartolo Handicap is named in honor of the founder of Remington Park.

Potential Oklahoma Derby Starters in Prep Race
Poseidon’s Way ran down his stable-mate Hillbilly Royalty to win the fourth race Saturday, a $44,000 allowance event for 3-year-olds. Many in the race will gauge their performance and could very well make their next start in the Grade 3, $400,000 Oklahoma Derby on Sept. 27.

Poseidon’s Way tracked pace-setting Hillbilly Royalty throughout the first six furlongs of the one-mile race before making his run at the top of the stretch. Hillbilly Royalty was clear by about four lengths with a little more than a furlong left but could not hold off Poseidon’s Way who hit the finish in 1:37.54 over the fast track, a head better than his rival.

Both runners are trained by Donnie Von Hemel who will have options if he makes an attempt to win his fourth Oklahoma Derby. Owned by Pin Oak Stable of Versailles, Ky., Poseidon’s Way is a perfect two-for-two at Remington Park, having broken his maiden status here as a 2-year-old last year. He was ridden to his allowance win by Luis Quinonez.