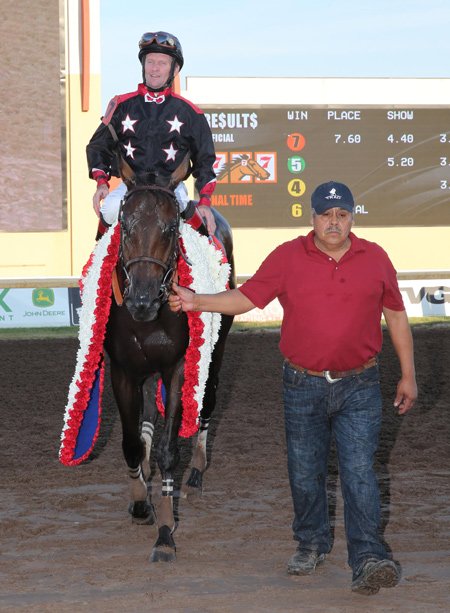 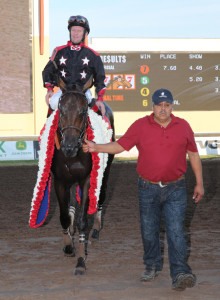 The $250,000 Springboard Mile, the top 2-year-old race of the season, headlines the final weekend of Remington Park’s 2015 Thoroughbred Season. Sharing the billing is retiring jockey Cliff Berry, who will use the Springboard Mile as his final Remington Park race as he caps a brilliant career in Oklahoma City.

Remington Park and the horse racing community will honor the retiring jockey with “Cliff Berry Night” on Saturday, Dec. 12. The evening will include a series of presentations throughout the race card and cash prize drawings for fans who have entered.

Berry, 53, of Jones, Okla., has determined this Remington Park season will be his final in the saddle. The all-time leading Thoroughbred rider in Oklahoma City has 2,124 local wins heading to his final three days of competition. Berry will put the finish on a career that has included 4,456 wins through Dec. 7 and total mount earnings of more than $67.3 million.

The 4,456 career wins places Berry 44th on the all-time list of jockeys. His career mount earnings of $67.3 million rank him 84th all-time.

Berry started his riding career in 1981. He has been the season’s leading jockey at Remington Park 15 times while also winning titles as leading rider at other venues such as Oaklawn Park in Hot Springs, Ark. and Lone Star Park in Grand Prairie, Texas where he is also that track’s all-time leading jockey by wins.

The final season of Remington Park racing has seen Berry stay in the top five of the jockey standings, while not riding nearly as many horses as used to be his norm. Going into the final weekend of the season, Berry has 46 wins from 259 mounts with 53 second-place finishes and another 42 efforts for third. He has won 18% of his races and has finished in the top three in 54% of his starts. He has accumulated over $1.6 million in mount earnings during this season.

The astounding seven-win night for Berry in 2010 was a perfect evening of racing as he won all seven of the races in which he competed. He even picked up a mount as he originally was only scheduled to ride six races that night.

The final weekend of the 2015 Thoroughbred Season takes place Friday thru Sunday, Dec. 11-13.