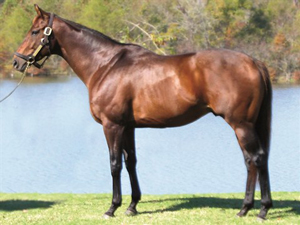 Chatain, a multiple graded stakes winner, will move to Carrol Castille’s Whispering Oaks Farm-Louisiana Stallion Station North in Carencro, Louisiana, for the 2014 breeding season. He stood at Holly Hill Farm in Benton, Louisiana, in 2013. His stud fee has been set at $1,500, payable when the foal stands and nurses. He will stand as the property of a partnership.

A son of Forest Wildcat, Chatain won Gulfstream Park’s Hal’s Hope Handicap (G3) twice and set a new track record for a mile in 1:33.4. From a limited first crop, his top-earning progeny is Texas-bred Pardonmecomingthru, a two-time winner who was stakes-placed in the TTA Sales Futurity. His oldest runners are 3-year-olds.

“We are pleased to add Chatain to our stallion roster here at Whispering Oaks,” said Castille. “He was a very talented miler whose progeny have performed well at the track, and he will have every chance to succeed here alongside Closing Argument, Salute the Sarge, Sorcerer’s Stone and Unbridledsensation.”