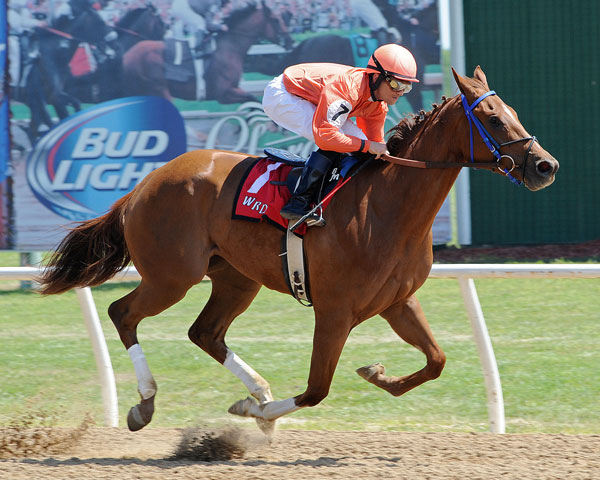 In the $55,000 Cinema Handicap for fillies, Twisted Chaps Racing Stable LLC’s Chaparella drew clear to an impressive 5 ¼-length victory with Bryan McNeil up for trainer Roger Engel. The daughter of Service Stripe was making her first start since a maiden-breaking win in December at Remington Park. She has now banked $75,029 with a record of 4-2-2-0. She was bred by Rusty Roberts, and her sire stands at Caines Stallion Station in Oklahoma. Chaparella, who clocked a mile and 70 yards in 1:43.16, sold for $10,000 at the Heritage Place Thoroughbred sale in December 2014 from consignor Ellen Caines.

In the $55,000 Will Rogers Handicap for colts and geldings, Shawn Schabel’s Catfish Creek earned his first career stakes win with a 3 ¾-length win. The colt by Tiz Wonderful was ridden by Belen Quinonez for trainer Scott Young. The Oklahoma-bred got the one mile and 70-yard distance in 1:42.53.

Like Chaparella in the other stakes on the card, Catfish Creek was making his first start since a maiden win at Remington Park. This marked just the third start for the colt, who has now earned $61,783. Catfish Creek sold for $67,000 at the Carter Sale’s Co.’s OKC Summer Sale in 2014 from Brewster Ranch, agent for Clark Brewster. Brewster is also the breeder of Catfish Creek.