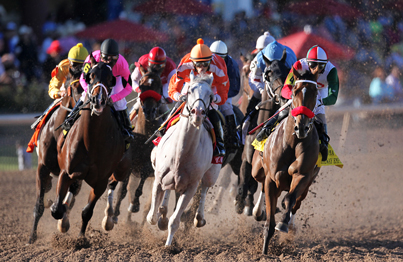 Departing came into the Grade 3, $400,000 Oklahoma Derby Sunday afternoon at Remington Park seeking a fourth derby score in 2013. A heavy-wagering favorite at 1-5 odds, Departing could not rally to catch pace-setting Broadway Empire who led throughout to pull the upset.

The winner of the Canadian Derby (G3) in late August at Northlands Park in Edmonton, Alberta, Broadway Empire figured to be the horse on the lead early in the 1 1/8 miles Oklahoma Derby. Despite setting good fractions throughout, Broadway Empire never tired and was never challenged, leading by a least a length or more for the entire trip around the fast main track. Drawing away by four lengths at the end, Broadway Empire captured his second straight derby in 1:49.44.

The plan to compete in the Oklahoma Derby was mapped out months ago by trainer Robertino Diodoro and came to fruition with a solid effort. “You want to take one step at a time. Before the Canadian Derby, I had this race picked out and it all worked out.”

Jockey Rico Walcott rode Broadway Empire, as he did in his last two stakes wins at Northlands Park, including the Canadian Derby. He was confident of the gelding’s chances despite the heavy considerations of Departing who had previously won the Illinois Derby (G3), the West Virginia Derby (G2) and the Super Derby (G2).

“I talked to Robertino, he told me the horse was training good,” said the jockey. “A couple people had told me about the 7-horse (Departing) as the horse I had to watch. I just got him out of the gates and got a good break. He dragged me out to the front so I just tried to get him to relax. When we were coming into the head of the lane I asked him and he picked it up.”

Walcott believed Broadway Empire could handle the Oklahoma Derby measure, having won the Canadian Derby on a five-furlong track, going a quarter-mile farther.

“He felt pretty good to me when he was finishing out like he would still go some more. The last race he ran was 1 3/8 miles so he shortened up a little bit and I thought he had a good chance.”

An Alberta partnership of Randy Howg, Bob Butz, Fouad El Kardy and Rick Running Rabbit all made the trek to Oklahoma City to watch their charge and the trip was well worth the effort.

“I told Robertino if it was up to me we’d probably have about 10 races under our belt,” Running Rabbit credited. “He’s done an excellent job of managing the horse and all the credit goes to him and his crew.”

The show pays were elevated due to an extreme amount of show money placed on Departing who did not cash the tickets for his big backers, running fourth, three-quarters of a length behind Carve.

The first win for all of the connections in the Oklahoma Derby, Broadway Empire won his fourth race from six starts, all in 2013. The winner’s share of $240,000 boosted his career total to $405,745.

Broadway Empire is by Empire Maker from the Belong To Me mare Broadway Hoofer and was bred in Kentucky by Mercedes Stables.

The remaining order of finish was Braveman (5th), Holiday Mischief (6th), Texas Bling (7th) and He Has Bling (8th).

The Oklahoma Derby was the main event on a Sunday afternoon card featuring five other stakes races.

Montana Native rebounded off a last-place finish in the Grade 1 Alabama Stakes against Princess Of Sylmar, widely considered the best 3-year filly in the nation, to win the $200,000 Remington Oaks virtually gate to wire.

The win did not come easily for the 5-2 betting public’s second-choice, as Montana Native fought every step of the race to win by a nose over the tenacious Gold Medal Dancer.

“I was able to sit pretty much until the head of the lane,” said jockey Terry Thompson of his run aboard Montana Native. “Luis’ (Quinonez) horse (Gold Medal Dancer) was on us all the way. It was just a horse race from the eighth-pole home. We were just fortunate to have the head-bob at the wire. Both fillies dug in and you couldn’t split them. Our head was down at the wire.”

Montana Native is owned by Ghostzapper Racing of Toronto and the daughter of Yes It’s True from the Quiet American mare Special American covered the 1-1/16 miles race in 1:43.68. Trained by Kenny McPeek, Montana Native gave Thompson his third Remington Park Oaks victory in the last five years. He previously won aboard Payton D’Oro (2009) and No Such Word (2010).

The win is the fourth from a dozen career starts for Montana Native who picked up $120,000 to run her lifetime earnings to $276,198. She was bred in Kentucky by Westana Ranches.

Wine Police displayed his class and enjoyed a perfect trip to win the Remington Park Sprint Cup by three-quarters of a length. Patiently ridden by jockey Enrique Gomez, the talented 5-year-old gelded son of Speightstown, the 2004 North American Champion Sprinter, raced along the rail behind the 27-1 pace-setting longshot Beggarthyneighbor.

Wine Police gained a one-length advantage with a furlong to run, as the 3-5 wagering favorite Alsvid, was struggling to make up lost ground. Alsvid, last year’s winner of the Remington Park Sprint Cup, was well off the pace and behind runners in the early stages of the race. He raced willingly through traffic and was gaining on the leader in the stretch but was not able to overcome his early position. Okie Ride, a popular Oklahoma-bred sprinter, was always in contention but could not finish with the top pair.

The fifth career win from 11 starts for Wine Police was worth $90,000 to up his overall bankroll to $337,037. A gelding from the War Deputy mare Deputy Cures Blues, Wine Police was bred in Kentucky by John & Martha Jane Mulholland.

Unbeaten in two lifetime races over the Remington Park turf course, both this season, Daddy Nose Best won the DeBartolo Memorial in August followed by a rousing score in Sunday’s Remington Green.

The 4-year-old colt by Scat Daddy from the Thunder Gulch mare Follow Your Bliss, Daddy Nose Best ran 10th in the 2012 Kentucky Derby and 9th in the Preakness Stakes, but has blossomed since racing over the grass. Trained by Steve Asmussen and owned by Cathy and Bob Zollars of Dallas, winning jockey Ricardo Santana, Jr. pushed the classy colt through between runners nearing the top of the stretch and with clear sailing, the even-money favorite wore down 18-1 longshot, Caberneigh, also trained by Asmussen. Daddy Nose Best crossed the finish 3-1/2 lengths clear of his stable mate.

As expected, No Spin set the tempo in the 1-1/16 miles Green but could not stay the distance and finished third.

The victory is the seventh from 21 attempts for Daddy Nose Best, bred in Kentucky by Patricia Ann Elia Trust. He gained another $60,000 for his Green triumph to roll his career earnings to $818,989.

Remington Park’s major stakes races for 2-year-olds got underway on the Oklahoma Derby undercard with the six-furlong Kip Deville Stakes. Aarons Orient used a good start to set his position on the lead and never looked back, drawing clear to win by 3-3/4 lengths.

Owned by Marc Wexler of Matawan, N.J. and trained by Steve Asmussen, Aarons Orient was ridden by Ricardo Santana, Jr. The colt broke his maiden status in his last start, just the second of his career, at Saratoga Racecourse.

A colt by Orientate from the Jambalaya Jazz mare Are U Being Served, Aarons Orient earned $45,000 to move his career total for three races to $97,000. He was bred in Kentucky by Ashleigh Stud Farm and Frank & Jackie Ramos.

Okie Nova rallied to win her first race over the turf, in her seventh career start on lawn, at the proper time in Sunday’s Ladies on the Lawn Stakes for Oklahoma-bred fillies and mares.

Owned by Richter Family Trust and B.J. Richter of Perkins, Okla. and trained by Kenny Nolen, Okie Nova was ridden by Cliff Berry. The 4-year-old filly sat in mid-pack in the field of nine for most of the 7-1/2 furlongs, but was always within striking distance from a good position at the rail. She made up quick ground in the stretch to pull clear by 2-3/4 lengths over the pace-setting In The Band with Lady Jensen another half-length back in third.

Overall, Okie Nova won just her second career start from a dozen tries. The Ladies on the Lawn was also her first win at Remington Park in nine attempts. The winner’s share of $30,000 now gives her $74,472 overall. Bred by the Richter Family Trust, Okie Nova is a 4-year-old filly by Cavvy from the Bernstein mare Okie Valoy.

Remington Park racing now moves into October with the live schedule returning to its normal weekly slate of Wednesday thru Saturday at 7pm.