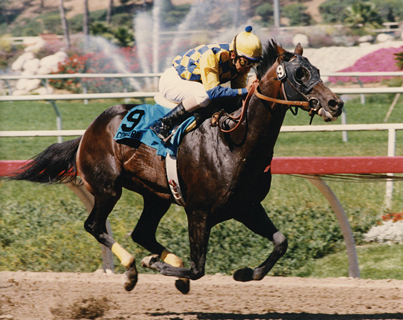 Concern, the only Breeder’s Cup Classic winner to race and stand at stud in Oklahoma, died this week. He had just turned 24.

The winner of the 1994 Breeder’s Cup Classic was laid to rest at Oklahoma Equine Reproductive Center in Washington, Oklahoma. The Maryland-bred son of Broad Brush moved from Northview Stallion Station in his home state to OEH in 2004, where he stood until being pensioned in 2011.

Concern brought national attention to the young Remington Park when he ran in the 1994 Great Western Stakes. Concern ran third that day behind Al Horton’s Oklahoma-bred Silver Goblin before winning the Arkansas Derby at Oaklawn Park and ultimately the Breeders’ Cup Classic.

Going off as the fourth betting favorite in the Classic at Churchill Downs, Concern unleashed his familiar clocking kick and went from last to first. Running six wide in the stretch, he caught Tabasco Cat in the final yards to win by a neck as Tom Durkin shouted, “And it’s Concern from out of the clouds!” (view here)

A lifetime winner of $3,079,350, Concern won more than any other horse to compete exclusively in North America in 1994 with a bankroll of more than $2.5 million that year. In 1994, Concern ran 14 times, with three wins, five seconds and six thirds. He was a runner-up for the 3-year-old Eclipse Award to Holy Bull (who was also named Horse of the Year).

Out of the Tunerup mare Fara’s Team, Concern was bred by leading Maryland breeder Robert E. Meyerhoff. His 3-year-old campaign included a third-place finish in the Preakness Stakes and Haskell Invitational and a second in the Travers Stakes at Saratoga.

His narrow defeat to division champ Holy Bull in the Travers was again a classic with his dramatic late closing style. Concern was nearly 22 lengths behind Holy Bull before pulling within four lengths with a quarter mile to go and then battling to the wire, losing by a neck.

While it was his patented late move that endeared him to racing fans, it was his professional personality that will be missed by all who knew him here.

“Concern was such a gentleman to be around. He wasn’t your typical stallion. He honestly had the presence of a Classic’s winner and many fans came just to see him,” said Oklahoma Equine’s Dr. Joe Carter.

“He was born on Valentines Day in 1991 and he had the big heart to prove it,” Carter added.

Concern was 3-year-old Champion and Horse of the Year in Maryland and is in the Maryland Thoroughbred Hall of Fame.