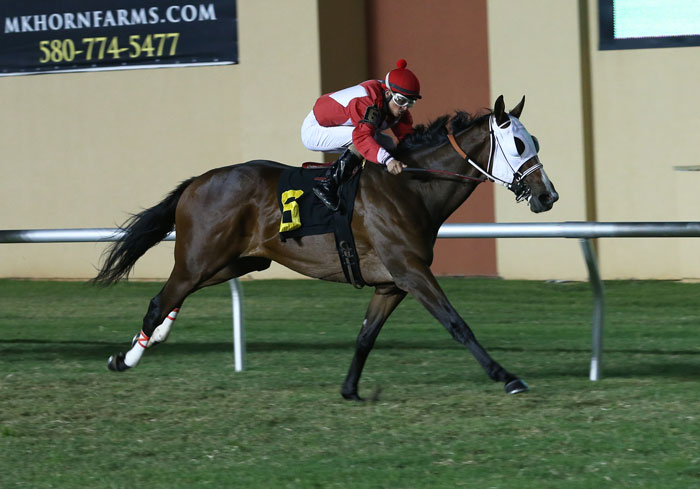 Remington Park’s Friday program had many chapters of success with a new turf course record, a big multi-win night for a jockey and a near milestone victory for the track’s all-time leading trainer.

Donnie Von Hemel is now just one win away from his 1,000th Remington Park training victory, after Strive won for the third time this season. The 3-year-old filly is undefeated in three turf starts here, winning the final race on Friday by five lengths. The victory in the $38,297 allowance at a mile over turf is the 999th at Remington Park for Von Hemel.

The all-time leading Thoroughbred trainer in Oklahoma City, Von Hemel has just one horse entered on the Saturday night program. Ithappenedinvegas will start in race five for Von Hemel, a one-mile maiden race for 2-year-old fillies over the turf, trying to get the milestone for her trainer.

New Turf Sprint Record
Wings Locked Up was a solid second in the $150,000 David M. Vance Sprint to Ivan Fallunovalot on the Oklahoma Derby undercard last month. Friday night, he returned to action in a five-furlong turf allowance. Not only did he get the victory, he set a new course record in the process.

Owned by Sad Sac Racing of Edmond, Okla. and trained by Clinton Stuart, Wings Locked Up went to the lead from the start under David Cabrera and pulled clear to win by 2-1/2 lengths, crossing the finish in :55.09 seconds over the firm going. The 4-year-old Oklahoma-bred shaved .05 seconds off the old mark set in September 2005 by Calling Randy.

The win in the $37,400 allowance race was the 11th from 28 career starts for Wings Locked Up, a gelding by Munnings from the Capote mare Sixteen Spices. He made $22,287 in his record-setting voyage to build his lifetime earnings to $293,366.

Cabrera Wins 5!
Jockey David Cabrera is enjoying his first-full season at Remington Park. Friday night he rode every race on the program and managed to win five of them. The riding quintuple moved Cabrera to the top of the jockey standings.

The first win of the night was a shared victory as Cabrera’s mount in race two finished in a dead-heat for the score. Given To Fashion ($3.20 to win) dead-heated with Lady Brighton to start the big evening for Cabrera.

Next up was a victory in race five aboard Cowboy U Know ($5.40) then aboard Wings Locked Up ($5.80) in his five-furlong turf course record. In race seven, Cabrera rallied Suite Gossip ($4) to a maiden-breaking win. Finally in race eight, the fifth Cabrera win of the night was with first-time starter Eurobond ($5.80).