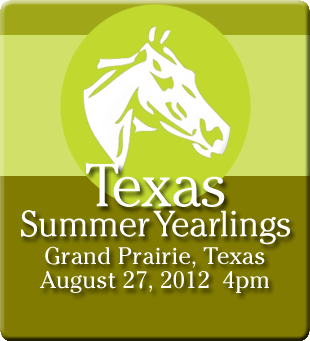 The Fasig-Tipton Texas Summer Yearling Sale on August 27 featured a late afternoon start time as opposed to its traditional mid-morning start, and the final numbers showed an increase in the median with a slight drop in average for a smaller selection compared to last year.

“We had a good sale,” Tim Boyce, director of sales for Fasig-Tipton Texas, told The Blood-Horse. “We were happy with everything. The new format was well-received. We started a little slow out of the gate, but we got back close to last year’s average.”

A Louisiana-bred colt by Successful Appeal topped the sale with a bid of $57,000 from Brad Grady. The April foal from the consignment of Mark Toothaker, agent, is out of the productive Mr. Greeley mare Excellent Review.

While Louisiana-breds accounted for the top two sellers, Texas-breds and Oklahoma-breds placed high on the list of top prices. A Texas-bred filly by Even the Score was hammered down for $47,000 while Texas-bred colts by Texas stallions Too Much Bling and Early Flyer attracted bids of $40,000. An Oklahoma-bred filly by Harlan’s Holiday also brought a bid of $40,000 to give horses bred in the two states four of the top six sellers.