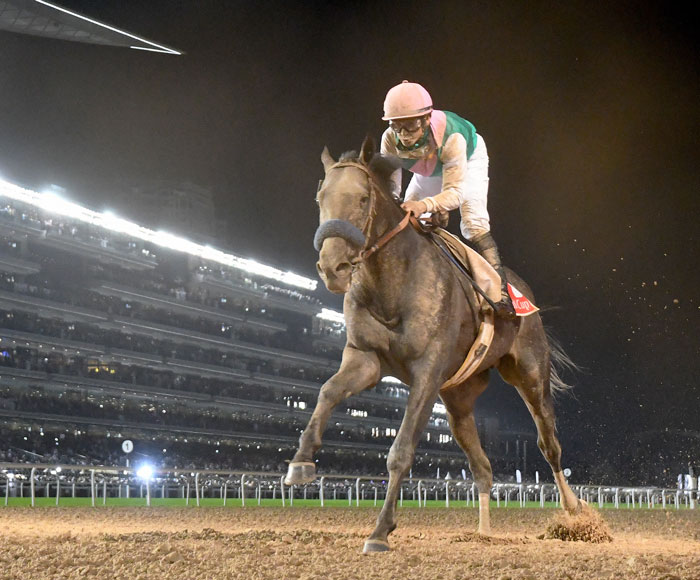 Arrogate has captured the attention of the horse racing world and the public at large with his spectacular rise to stardom, mostly recently showcased with a dominating win in the $10 million Dubai World Cup at Meydan Raceourse in the United Arab Emirates. The 4-year-old son of Unbridled’s Song won despite a horrendous break out of the gate, leaving him last in the field of 14. That victory, along with impressive wins in the Grade 1, $1.25 million Travers Stakes at Saratoga, $5.52 million Breeders’ Cup Classic at Santa Anita and inaugural $12 million Pegasus World Cup Invitational Stakes at Gulfstream Park, have made Arrogate an international sensation, but his roots go back to a mare who raced exclusively in Oklahoma, Texas and Louisiana.

Arrogate’s dam is the Distorted Humor mare Bubbler, a Kentucky-bred daughter of Distorted Humor who ran for breeder Du-Zee Stable and trainer Bret Calhoun. Bubbler made her racing debut at Remington Park with a 6 1/2-length maiden win and then a 7 1/2-length allowance/optional claiming victory. The filly closed out an undefeated 3-year-old campaign with a neck victory in the $100,000 Gallery Furniture Distaff Stakes at Sam Houston Race Park. Bubbler captured three more stakes as a 4-year-old with wins in the $57,600 Marie G. Krantz Memorial Handicap at Fair Grounds, $50,000 Sam Houston Distaff Stakes in Houston and $50,000 Irving Distaff Stakes on the turf at Lone Star Park. She concluded her racing career at Lone Star with a third in the $200,000 Ouija Board Distaff Handicap (G3) on the turf. She was retired later that year due to injury with a record 9-6-0-1 and earnings of $211,622.

“She did a lot in a short period of time,” Calhoun told Mary Rampellini of Daily Racing Form. “She started off running in those stakes pretty inexperienced and moved up the ladder pretty easily. Horses like her don’t come along often.”

Arrogate, who was bred by Clearsky Farms and sold for $560,000 to owner Juddmonte Farms as a Keeneland September yearling, has earned $17,084,600, surpassing California Chrome as the all-time richest Thoroughbred based in North America.

“I can’t believe we won,” said trainer Bob Baffert, who also conditioned Triple Crown winner American Pharoah, after Mike Smith piloted Arrogate to a come-from-behind win in Dubai. “That is a great horse right there. It was terrible, terrible, he walked out of the gate. I tell you what, Mike Smith did a great job. He didn’t panic, he just thought, well I just get him around there. Mike Smith, what a job he did. Unbelievable. This is the greatest horse we have seen since Secretariat. Unbelievable.”

After being retired from racing, Bubbler sold for $170,000 to Eamon Clearly at the Fasig-Tipton Kentucky fall mixed sale. She was consigned to that same sale in 2016 by Clearsky Farms in foal to Into Mischief but did not meet her reserve when the bidding stopped at $4.7 million. Arrogate is Bubbler’s first foal to race, and she has a 2-year-old filly by Medaglia d’Oro and a yearling filly by Giant’s Causeway.

The runner-up to Arrogate in the Dubai World Cup, Gun Runner, also has a connection to the region as his trainer is Hall of Famer Steve Asmussen, and the son of Candy Ride (Arg) has won graded stakes at Oaklawn and Fair Grounds.