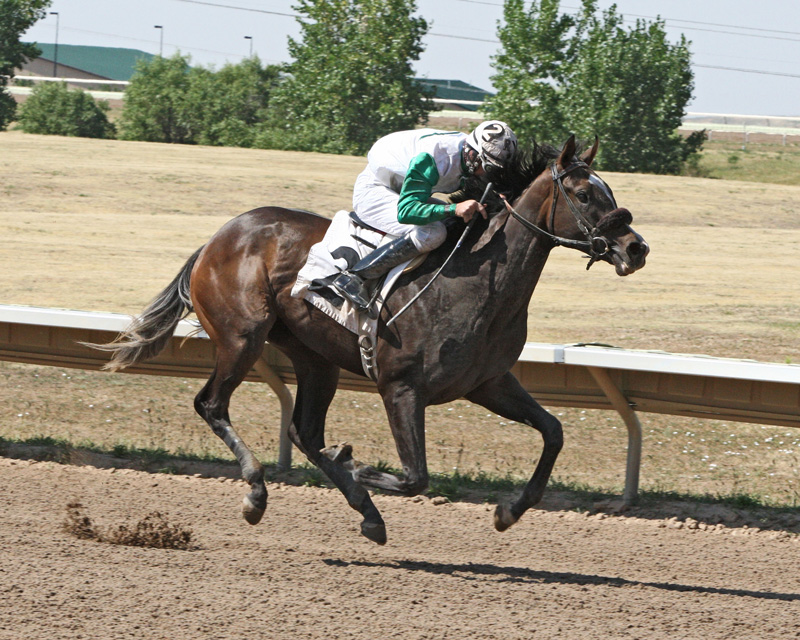 The $100,000 Gold Rush Futurity, which is Colorado’s richest race for Thoroughbreds, and the $115,830 Mile High Futurity for Quarter Horses highlight the final day of Arapahoe Park’s 2016 season on Sunday.

The six-furlong Gold Rush Futurity has attracted a field of nine 2 year-olds made up of Colorado’s best and stakes winners from out-of-state. Arapahoe Park stakes winners in the race are Way Out West (CTBA Futurity and Silver Cup Futurity) and Galactic Princess (Arapahoe Park Debutante).

“I think there’s a lot of home-court advantage here,” said Tyrone Gleason, the trainer of Colorado-bred Way Out West. “You see a lot of horses that ship in that don’t get there.”

But one of the shippers, the undefeated Crosscheck Carlos, has connections that are familiar with success in Colorado. One of the owners of the California-based winner of the $100,000 D. S. Shine Young Futurity at Evangeline Downs in Louisiana is Colorado Avalanche defenseman Erik Johnson.

“He’s really handled everything well for a 2-year-old,” Johnson said. “We flew him from L.A. to Lexington and vanned him down to Evangeline. [He] won in the slop there by a head. We shipped him back [to California]. We’re going to ship him out here. All signs point to him firing, hopefully going three-for-three.”

No filly has ever won the Gold Rush Futurity since the race moved from Centennial Race Track to Arapahoe Park in 1984. Stratagem and Ms. Battlefield finished second and third, respectively, in 2014.

However, as mares like Tepin and Beholder have shown the ability to defeat male horses nationally, a strong group of fillies will try the Gold Rush, including stakes winners Galactic Princess, Bling On the Music, and McKenzie Honey.

Colorado-bred Galactic Princess rocketed past her competition in the Arapahoe Park Debutante on July 30, winning by a larger margin (three lengths) and a faster 5 1/2-furlong time (1:05.00) than Way Out West did in the Silver Cup Futurity for male horses on the same day.

Texas-bred Bling On the Music dominated the $93,000 Texas Thoroughbred Futurity at Lone Star Park by 8 1/2 lengths on July 9. She is owned by Danny Keene’s Keene Thoroughbreds, who shipped Texas Chrome to win the 2015 Gold Rush. Since winning that race last year, Texas Chrome has added three more stakes wins and hit the board in two graded stakes, including the Grade 3, $250,000 Iowa Derby.

“I think at this time of the year, as 2-year-olds, sometimes the fillies can be just as mature,” said Mark Hillman, breeder and owner of Galactic Princess.