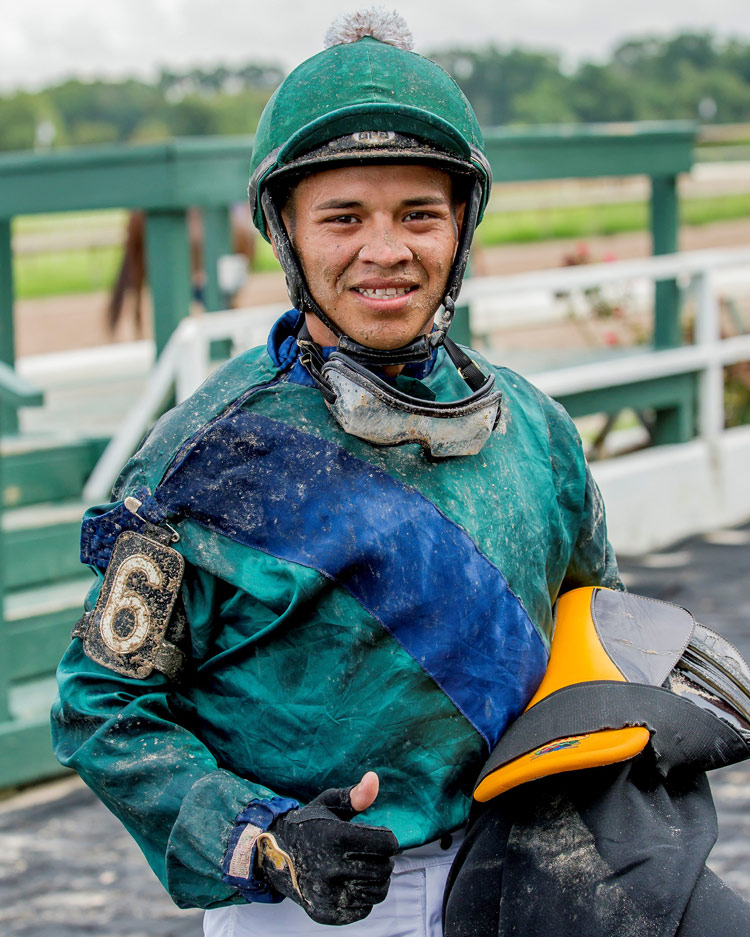 The 2017 Thoroughbred racing season at Harrah’s Louisiana Downs is off and running. One rider kicked off the meet on Saturday, May 6, with an early message that he is “in it to win it.” That jockey is apprentice Jose Andres Guerrero.

“I wanted to learn everything,” explained Guerrero. “I cleaned stalls, groomed and galloped. It was important for me to know as much as possible about horses.”

He got his license at 19 and was named on 11 horses in 2015. His first victory came in 2016 and he completed the year with a record of 31 wins, 40 seconds and 42 third-place finishes. Through the first five months of this year, Guerrero has already had his photo taken in the winner’s circle 28 times. He won three races here on opening day and promptly added two more on the first Monday live race day of the meet.

“Each race is different,” he explained. “Sometimes when you are on the lead, you just need to get your horse to relax. But on the longer races, you will need to rate and find an opening. I believe that you have to be friends with the horse and feel what he feels.”

Trainer Patti Turner has been a believer from the beginning.

“I got to know Jose last year at Louisiana Downs,” she said. “He galloped for me in the mornings and impressed me as a hard worker. But where he has really developed is his ability to get horses to relax. He fits my horses well and his mind is in the right place.”

Guerrero has proven to be a very versatile rider; several of his mount have won in gate-to-wire fashion, including Turner’s Canofspots on Saturday. Two races later, he deftly guided Strollin South from sixth to first, winning by a margin of 2 ¼ lengths. Guerrero describes the feeling of passing horses and closing from the clouds as “incredible”.

“Personally, I think Jose’s best riding style is to lay back and make that late run,” added Turner. “But one thing is for sure: he is a rising star!”

Guerrero has ridden at Louisiana Downs, Sam Houston, Lone Star and Oaklawn Park. It was at Hot Springs, Arkansas, that he met his hero, Calvin Borel.

“He was a jockey that I always loved to watch,” admitted Guerrero. “I love the way he rides; the way he looks on a horse. When I was at Oaklawn, I met him and he was very nice to me.”

Guerrero acknowledges that he has a lot to learn about his craft; he watches replays and listens to advice from his fellow riders.

“Sometimes you have so much horse under you that you have to do very little,” he said. “But in some races, if you don’t have a clear path, you only have two seconds to make a decision.”

He has established a solid working partnership with his affable and energetic agent, Steve Melancon, who took his book last year.

“He is very grounded and has a very strong work ethic,” said Melancon. “Maybe his strongest attribute is how much he takes care of his family. Every time he cashes a check, he sends money home to his mama.”

So, as the meet continues, look for much more from this young apprentice jockey. He will lose his “bug” in July, but a smooth translation to the journeyman ranks seems very likely. Would he love to win his first leading jockey title at Louisiana Downs? Absolutely, but he is respectful about learning and how much work it takes to reach the next level.

“My faith in God keeps me humble and I want to always be a good person,” stated Guerrero. “I wake up every morning trying to work hard and do my best for each trainer.”

The 2017 live Thoroughbred racing season at Louisiana Downs opened on May 6th. Unlike Churchill Downs, fans at the Bossier City racetrack enjoyed sunny skies and an enthusiastic opening day crowd was on hand.

Officials reported substantial increases in handle over the first two days of the Live Thoroughbred Racing season. Live and export handle was up a combined 19% over the weekend.

“By all accounts, we had a very successful opening day at Louisiana Downs,” said Trent McIntosh, Louisiana Downs assistant general manager. “We welcomed back fans with plenty of promotional opportunities, increased field sizes, and horseplayers responded well to the Total Rewards incentives offered on both live and simulcast racing.”