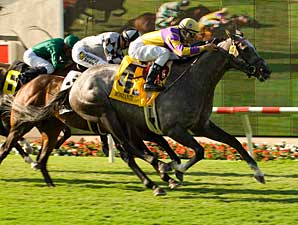 By now many people both inside and outside of the horse racing industry have heard about the death of Monzante, a regally-bred former Grade 1 winner who was pulled up during a $4,000 claiming race at Evangeline Downs on July 20 and euthanized shortly thereafter. There are plenty of opinions on who or what is to blame, in no particular order: the racing commission, racetrack, breeder, veterinarians, current and former owners and trainers, the use of medication in racing, etc. I don’t really know who is to blame. Since I don’t think I could even train a horse to walk across the street, I’m not sure I’m qualified to determine or understand the condition of the horse before, during or after the race and the many factors and events that ultimately caused his demise.

Instead, I want to bring up another point that seems to have been missed in all of this. There is widespread (and justified) outrage about Monzante’s death, from racing journalists and longtime fans to people on Facebook and Twitter who have probably never been to a horse race and are signing a petition demanding that the National Thoroughbred Racing Association (NTRA) investigate his death (despite that the NTRA really has no power or authority to do much of anything in this area). I can certainly understand the outrage, both from those within the industry and casual observers, but I have to question why there is so much outrage about this particular horse. Just because Monzante won a Grade 1 race and had a million-dollar pedigree, does that make him more deserving of a happy retirement? Does a gelding by a stallion who stands for $1,000 (Maria’s Mon, the sire of Monzante, stood for as high as $60,000) and who “only” won a couple of claiming races, or never won a race at all, not deserve to be treated with respect after his racing days are over? Some of my favorite horses have been “cheap claimers.” Maybe they didn’t have the pedigree to win the Kentucky Derby, or even an allowance race, but they still went out on the track and ran their hearts out for us to watch and enjoy. So I would submit that it doesn’t really matter if a horse was a Grade 1 winner or not a winner at all; we still need to find a way to care for them when they leave the track. Clearly Monzante deserved better, but so do all the others.

An argument could be made that Monzante enriched (literally) the lives of his breeder and former owners and trainers much more than the average racehorse, and that some of the profits from his nearly $600,000 in earnings should have been used to give him a retirement party and a place to live out his life once his best races were behind him. Certainly there have been some cases where that has happened, and maybe there is some validity to that idea, but the fact is that most horses will not earn enough money to set aside a significant amount for retirement, and most owners, trainers and breeders are not the millionaires portrayed in movies about the “sport of kings.”

I don’t know what the answer is to fix this problem, but I do know that the industry has come a long way in the 20 or so years I’ve been involved. While there have always been places for retired racehorses, it seems to me that there are many more options now and a much greater acceptance from those outside of racing that Thoroughbreds can indeed go on to productive second careers in a variety of disciplines. For a great example of that, check out what Zee Oh Six, an Oklahoma-bred who won nine stakes during his career, is doing now by reading this story. But of course there is room to improve.

One other thing that bothers me about this story is how some of the outrage seemed to focus on the fact that Monzante was running in a low-level claiming race in Louisiana of all places. It was as if Louisiana (and by association and proximity, Texas and Oklahoma) is some kind of Wild West territory where anything goes in racing. And some of the commentators, both professional and amateur, seemed incredulous that Monzante was at the “bottom of the barrel.”

Last time I checked, save for a few boutique meets like Del Mar and Saratoga, every track runs low-level claiming races, and many for lower purses than in this region of the country. It’s just another example of the racing media looking down on any tracks that don’t happen to be located in Kentucky, New York, California or Florida.

As for the implication by some that Louisiana has lax regulation, certainly things are not perfect in that state, but nor are they in any state, where no jurisdiction has the same rules and no jurisdiction has a perfect set of regulations. I happened to hear a presentation at the National HBPA summer convention by Dr. Steven Barker, a professor at Louisiana State University and state chemist for the Louisiana State Racing Commission, and I have to say I was completely impressed by the dedication he has to his work and the efforts that are being made to keep Louisiana racing clean.

I’m not going to offer any grand solutions to this problem, partly because I’m sure there are people smarter than me who can do that, but I would like to encourage anyone who visits this website, our Facebook page or enjoys reading Southern Racehorse magazine to contribute, either money or time, to one of the many horse retirement programs that are working to combat provide new homes and new careers for ex-racehorses. There are several good national programs, and we are also blessed with many excellent ones in this region of the country. To name just a few in Texas, Oklahoma and Louisiana, please consider LOPE, Remember Me Rescue, Oklahoma Thoroughbred Retirement Program, Thoroughbred Athletes Inc., Thoroughbred Retirement Network of Louisiana or another program of your choice. This is not something we can fix overnight, but we can’t fix it unless we try harder.