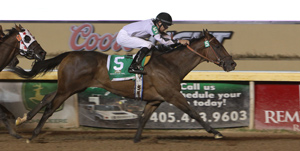 Alsvid swept the two main Remington Park sprint stakes of the season and the feat was enough for him to be selected as the 2012 Remington Park Horse of the Meeting for the recently concluded Thoroughbred season.

Owned by Black Hawk Stable of Elk City, Okla., Alsvid is trained by Chris Hartman and was ridden to both of his Remington Park wins by Chris Landeros. Alsvid won the $100,000 David M. Vance Sprint on the Opening Weekend of the season, then followed up with a score in the $200,000 Remington Park Sprint Cup on Sept. 29. The Sprint Cup served as a major undercard stakes on Oklahoma Derby Day.

A winner of four of five Remington Park starts in his career, Alsvid was also voted the season’s Champion 3-year-old Male and Champion Sprinter. The Kentucky-bred gelding by Officer from the Afternoon Deelites mare Reagle Mary was the only horse to pick up more than one award in voting by Remington Park officials and media covering the season.

Narrowly defeated in the 2011 Oklahoma Derby at Remington Park, Alternation returned to Oklahoma City to win the $200,000 Governor’s Cup on Aug. 11 as part of the season’s Opening Weekend. It was his only start of the season.

Owned by Josephine Abercrombie’s Pin Oak Stable of Versailles, Ky. and trained by Donnie Von Hemel, Alternation had made himself a nationally recognized older horse earlier in 2012 by virtue of his wins in the Grade 3 Essex, the Grade 3 Razorback Handicap and the Grade 2 Oaklawn Handicap. After sweeping the older horse stakes series at Oaklawn Park in Hot Springs, Ark., Alternation then posted a come-from-behind win in the Grade 3 Pimlico Special during Preakness Stakes Weekend in May.

The win in the Governor’s Cup made Alternation a millionaire in career earnings and bettered his Remington Park lifetime record to two wins, a second and a third from four attempts. The 4-year-old Kentucky-bred colt is by Distorted Humor from the Seattle Slew mare Alternate. He was ridden to his Governor’s Cup win by Luis Quinonez.

In one of the biggest upsets in Remington Park’s history, Texas Bling won the $300,000 Springboard Mile at odds of 128-1! The score in the richest 2-year-old stakes of the season earned the Texas-bred the Champion 2-year-old Male title.

Owned and bred by the Hall’s Family Trust of Fort Worth, Texas, the colt is trained by Danele Durham and was ridden in his Springboard win by Erik McNeil.

Texas Bling was full of run throughout the Springboard Mile and was able to get through traffic late in the stretch to power on to the big longshot score. He had broken his maiden status just two races prior, over the Remington Park turf course, with Cliff Berry up.

A winner of two of 10 career starts after the Springboard Mile, Texas Bling is by Too Much Bling from the Country Pine mare Anythingmore.

A win in the $50,000 E.L. Gaylord Memorial Stakes on Oct. 26 was enough to gain the Champion 2-year-old Female award for American Sugar.

Owned by Poindexter Thoroughbreds of Springfield, Mo. and trained by Lynn Chleborad, American Sugar was ridden to her lone score of the season by Alex Birzer. A daughter of Harlan’s Holiday from the Quiet American mare I Love America, the filly ran one more time, finishing fourth in the $50,000 Mistletoe Overnight Stakes on Dec. 9.

Leading from the starting gate to the finish line, Sticks Wondergirl was triumphant in her lone start of the season, the $250,000 Remington Park Oaks. She impressed enough to win a season title as Champion 3-year-old Female, after winning the richest race for fillies by three-quarters of a length while never seriously challenged throughout the 1-1/16 miles Oaks.

Owned by Alvin Haynes and Beth Burchell of Nicholasville, Ky., Sticks Wondergirl is trained by Greg Burchell and was handled by Jon Court in the Oaks. The effort was her third consecutive win after breaking her maiden over the summer at Ellis Park in Kentucky followed by an allowance score at Hoosier Park in Indiana.

Champion Older Female – She’s All In

Possibly the top Oklahoma-bred runner in training, She’s All In won the Older Female title after winning three races during the season, including her score in the $129,000 Oklahoma Classics Distaff on Oct. 19, her third consecutive win in the race.

A Graded stakes winner, She’s All In often moves around the country for stakes competition for her owner and breeder Robert Zoellner of Tulsa, Okla. Trained by Donnie Von Hemel, She’s All In was ridden throughout this season by Luis Quinonez. She won all three of her local starts in 2012 to run her career total at Remington Park to nine wins from 11 attempts.

A 5-year-old mare by Include from the Hickory Ridge mare Georgia Ok, She’s All In has now earned more than $766,000 overall.

Shipping to Oklahoma City from Woodbine in Toronto, Canada, Lockout made the trip worthwhile to win the $125,000 Remington Green Stakes on the undercard of the Oklahoma Derby on Sept. 30.

Owned by Oklahoma Horse Racing Hall of Fame Member John Oxley, Lockout is trained by Mark Casse and was ridden by Jermaine Bridgmohan to his Green score. A Kentucky-bred 3-year-old colt, Lockout is by Limehouse from the Wild Deputy mare Non Sibi.

A three-race win streak that included another victory in the $111,000 Oklahoma Classics Sprint, earned Okie Ride the title as the season’s top Oklahoma-bred. He also won the Classics Sprint in 2011.

Owned and bred by The Richter Family Trust of Perkins, Okla., trained by Kenny Nolen and ridden in all starts this fall by Luis Quinonez, Okie Ride added an open-company allowance event and the $50,000 Silver Goblin Stakes against Oklahoma-breds to his season win streak. He was a solid second to Alsvid in the $100,000 David M. Vance Sprint on Opening Weekend, adding to his credentials.

A 5-year-old gelding by Candy Ride (Arg) from the Geiger Counter mare Tic Tic, Okie Ride has earned over $294,000 overall and has seven career wins at Remington Park.

Busy throughout the entire season with seven overall starts, Fifth Date was very consistent in racking up three wins, a pair of seconds and one third to help get the claimer’s award.

An Oklahoma-bred 8-year-old, Fifth Date was claimed from Owner-Trainer Larry Brown on Aug. 25 for $18,000. New Owner Danny Caldwell took over the Fifth Date campaign and along with trainer Federico Villafranco, moved the veteran from sprinting to races over a mile, with success. Just two starts after the claim, Fifth Date won the richest race on Oklahoma Classics Night, Oct. 19, the $156,000 Classics Cup at 1-1/16 miles. Jockey Alex Birzer rode Fifth Date primarily with Lindey Wade up for his final win of the season during the final week of the meeting.

Berry has won three consecutive Steinberg Awards, denoting the leading rider for the Thoroughbred Season. The honor is named after the late rider who dominated the early years of Remington Park racing before his passing in 1993.

Luis Quinonez was second with 67 wins while Lindey Wade was third with 51 victories.

While Berry won the battle for wins, Quinonez led the way in mount earnings with $1,776,044. His biggest win of the season came aboard Alternation in the $200,000 Governor’s Cup on the meet’s Opening Weekend in August.

Trainer Steve Asmussen clinched his ninth Chuck Taliaferro Award as leading trainer at Remington Park, days before the final afternoon of racing had taken place. He ended the season with 47 wins.

Donnie Von Hemel was second in the trainer standings with 27 wins with Chris Hartman third at 26.

The Ran Ricks, Jr. Award for leading owner went to Danny Caldwell of Poteau, Okla. who visited the winner’s circle 21 times. This is his third consecutive leading owner title and his fourth since 2008.

Caldwell runs an operation that is strong in the claiming department, often purchasing runners out of races then immediately moving them up in class while gaining victory. He claimed Fifth Date, an 8-year-old Oklahoma-bred for $18,000 on Aug. 25, then won the $156,000 Oklahoma Classics Cup just two starts later with the gelding.

Caldwell’s horses are primarily trained at Remington Park by Federico Villafranco. He won his first Thoroughbred owner title in 2008 and picked up two more in 2010 and 2011.

Black Hawk Stable of Elk City, Okla. was second in the owner standings with 13 wins while the Richter Family Trust of Perkins, Okla. and Clark Brewster of Tulsa, Okla. shared third-place with 11.

The Richter Family Trust led the way for earning by owners with $511,790. Among their many winners was Okie Ride, a force in the local sprint division.

Open daily at 10am for casino gaming and simulcast racing, Remington Park features the Bricktown Brewery on the casino floor. Admission, general parking and valet parking are always free at Remington Park, home of the Grade 3 Oklahoma Derby, to be run for the 25th time on September 29, 2013.

Tracked by over 26,000 fans on Facebook and 3,000 Twitter followers, Remington Park is Oklahoma City’s only Racetrack & Casino and is located at the junction of Interstates 35 & 44, in the heart of the Oklahoma City Adventure District. For more information, reservations and group bookings please call 405-424-1000, 866-456-9880 or visit remingtonpark.com.