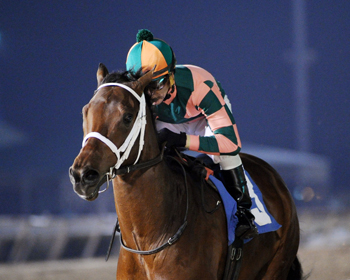 Jones shipped in Albano, a 4-year-old son of Istan bred and owned by Brereton Jones. As a 3-year-old, the colt showed promise, winning the Grade 3 Pegasus Stakes last summer at Monmouth Park and finishing second in the Grade 1 Haskell Invitational. Jones had options for his 2015 debut, but felt the timing of the $100,000 Maxxam Gold Cup was best.

Albano had no trouble with the mile and one-eighth distance of the Maxxam Gold Cup. Jockey Kerwin Clark was patient with the Kentucky-bred, guiding him through the first quarter-mile in :24.61 and the half-mile in :50.41. Unpressured throughout, he galloped home in 1.52.24, with a margin of three lengths over 30-1 shot Endurance.

It was a proud celebration for Clark and Jones and a first time visit to Sam Houston by prominent Kentuckian and former governor Brereton Jones.

“I knew they were in trouble after the first quarter mile,” said Clark. “I’ve always liked this colt. He was my ‘in’ to Larry Jones’ barn last year, so he will always have a special place in my heart. Larry had him ready to go and, what can I say? It’s just a privilege and a pleasure to be riding for these guys.”

Jones was aiming for the Mineshaft last weekend, but just didn’t see the “sparkle” in Albano, and opted to ship him to Houston for the Maxxam.

“He ran very well tonight, but it just showed what a poor training job I did on his last race,” said Jones with a smile, referring to his third-place finish at Fair Grounds on January 17. “It’s great to see him at the top of his game. I owe Governor Jones a lot of credit. He doesn’t put the pressure on me. He tells me that when the horses are right, let’s run them.

“It’s wonderful to be here with Kerwin, Larry and Albano,” said Brereton Jones. “The Good Lord has blessed us and we are grateful. I must admit that seeing such a nice performance from this homebred brought a tear to my eye.”

The $100,000 Maxxam Gold Cup at Sam Houston Race Park has had a rich tradition since its first running in 1994. Past champions of the mile and one-eighth main track feature include Sir Cherokee, Valhol, Student Council and Alumni Hall. The 2014 Maxxam champion, Red Rifle went on to win the Yankee Affair Stakes at Belmont Park as well as the Grade 2 Hawthorne Gold Cup in 2014.

The 5-year-old daughter of Kitten’s Joy did not disappoint as the favorite in the mile and one-sixteenth turf feature for fillies and mares. Bred and owned by Kenneth and Sarah Ramsey, Kitten’s Queen shipped to Houston off a second-place finish in the Blushing KD Stakes at Fair Grounds. Rider David Cabrera rode the mare with confidence, tracking the pacesetter One Time Only, who drew off to a five-length lead under Forest Boyce before Kitten’s Queen mounted her bid from the outside. She crossed the wire over the firm Connally Turf Course, in 1.42.71, two lengths ahead of Satin Gold.

Maker was reached via telephone following the win and was asked if he had any concerns about making up ground against a front-runner.

“I only worry when I am the one that far ahead,” quipped Maker.

It was a great highlight for Cabrera, who is second in the Sam Houston rider standings.

“I thank Mike for giving me the opportunity to ride for him,” said Cabrera. “The filly just took me there and at the top of the lane, I had plenty left.”

Kitten’s Queen returned $5.00 to win and added her fourth career win in 18 starts.

Maker and the Ramseys have a strong track record in the Jersey Lilly, winning last year’s stakes with Always Kitten and the 2013 edition of the turf stakes with Artemus Kitten, another quality Kitten’s Joy filly.

Maker had no definite idea for the next start for his filly, just stating that “several options” would be considered.

The one-mile event for 3-year-olds proved to be a nice coming out party for the strapping bay gelding, owned by Tommy G. Ligon.

The resurgent Kerwin Clark was aboard A Day in Paradise ($3.20) for his fifth career start and won the stakes in gate-to-wire fashion, drawing off by close to a two length margin in a final time of 1.40.38.

“He didn’t even know what he was doing,” said Clark of his mount. “He never really puts his mind to running; he just thinks he is out there for fun and games. In all honesty, this horse has not even figured it out yet, but it’s going to be fun when he figures out he is a racehorse.”

Jones affectionately dubbed his winner a “knucklehead”, but was very pleased with the victory tonight.

“He’s a big horse and that’s one of the reasons he’s coming around slowly,” Jones stated. “He’ll figure it out, and we’re pretty pleased with him.”

Elisabeth Alexander’s Indiana-bred Academy Bay, winner of the Indiana Futurity at Indiana Grand, ran second for trainer Steve Asmussen and Henry Witt’s homebred Witt Six, a Texas-bred by Drums of Thunder with Cabrera aboard, was third.

Georgia resident Ligon confirmed that A Day in Paradise will be pointed to the Grade 1, Louisiana Derby at Fair Grounds.

The Texas Heritage Stakes has been a springboard race for several notable champions including 2005 winner, Leaving on My Mind, 2004 Texas Thoroughbred Horse of the Year as well as Departing, who won in 2013, then added three graded stakes and amassed earnings of $1.5 million. Perhaps the most notable graduate is Kip Deville, who captured the 2006 edition of the Texas Heritage Stakes and became a multiple Grade 1 winner. The Oklahoma-bred won the 2007 Breeders’ Cup Mile at Monmouth Park and earned $3.3 million in his illustrious career.

Camel, Zebra and Ostrich Racing to Return Next Weekend
Sam Houston Race Park presents the return of exotic racing featuring Camel, Ostrich and the addition of Zebra races this year! Due to the popular demand, the unpredictable and fun-filled races will be held on two nights this year, Friday, March 6 and Saturday, March 7.

The exotic animal races will take place on the main racetrack in between live horse races. Some of Houston’s favorite radio and TV personalities will participate in the camel races with members of the Sam Houston jockey colony competing in the exhilarating Ostrich and Zebra races.