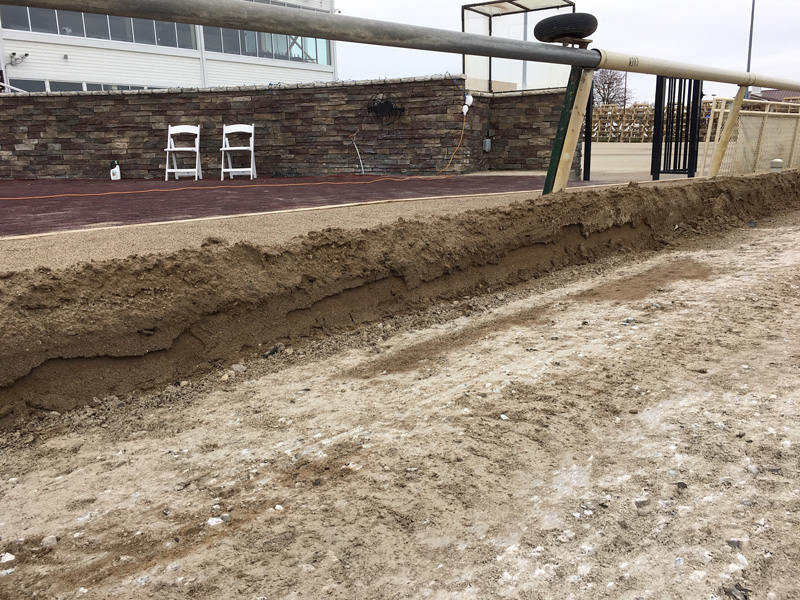 At the conclusion of the 16th season of Thoroughbred and Quarter Horse racing Wednesday, Nov. 7, the track maintenance crew immediately began renovation on the one-mile dirt racetrack at Indiana Grand Racing and Casino. The $700,000 project is expected to be completed in March 2019 when the barn area opens for training.

Several consultants have been brought in during the renovation, including Gerry Porcelli, former track man for NYRA for more than 40 years. Porcelli, who worked under famed Joe King, oversaw the maintenance of 14 individual racing surfaces during his tenure in New York. He along with Butch Lehr, who served as track man for Churchill Downs for more than 45 years, are working closely with Indiana Grand’s track superintendent Roy Smith for the project that will span more than four months.

“We are right on schedule,” said Smith. “We’ve been busy taking all the existing cushion off down to base and have been working with GRW from Lexington, who have done a lot of design work on racetracks across the country. We are receiving all new drawings and have shot elevations for the existing surface on both tracks. Once that is completed, then we will begin laying a new limestone cap over the existing base, which will take place before Christmas.”

Smith noted that once the three to four inches the lime “cap” has been placed over the base, they will let it set through the winter. New cushion, which will consist of six to eight inches of brand new cushion, will be put into place.

“In a project like this, everything is weather related,” said Smith. “The stage we are at now with the renovation, the cold weather actually helps us. We will lay the new cushion down the last of February or the first of March when we get a window of decent weather.”

The track renovation was identified as a priority of capital investments by Caesars Entertainment, who assumed ownership in July 2018. In addition to the track renovation, Caesars is also replacing the existing exterior stair wells on the grandstand, which will be completed before racing resumes in April 2019.

“We are very appreciative of Caesars willingness to step up and tackle both of these capital projects during our off-season of racing,” said Jon Schuster, vice president and general manager of racing. “It really shows the company’s commitment to ensuring safety is at the forefront of their business, and improving the track at this level is a major plus for our entire racing community.”

The 17th season of Thoroughbred and Quarter Horse racing will resume Tuesday, April 16, 2019. The 120-day racing meet will extend to Wednesday, Nov. 6. Racing will be conducted Tuesday, Wednesday and Friday at 2:05 p.m. with Saturday racing beginning at 6:05 p.m. Two Thursday racing programs will be held Thursday, July 18 and Thursday, Sept. 5 with a first post of 2:05 p.m.