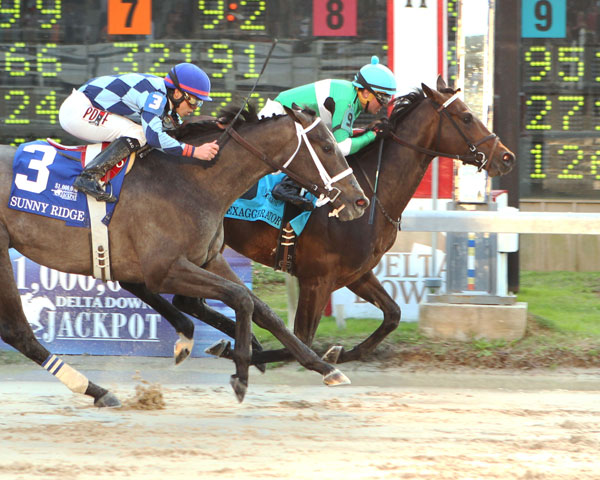 This year will mark the 14th anniversary of the $1,000,000 Delta Downs Jackpot, which is contested at 1-1/16 miles on a dirt surface. The race is the second richest in the country for 2-year-olds and has become a springboard to the Kentucky Derby. Since its inception the race has produced a total of 14 starters, including eight in the last four years, for America’s most historic race at Churchill Downs.

The 2015 Delta Downs Jackpot Day program featured eight stakes races and over $2.2 million in total purse money. The undercard was highlighted by the $400,000 Delta Downs Princess (G3) for 2-year-old fillies, which produces qualifying points to horses on their way to the Kentucky Oaks (G1). Hall of Fame trainer D. Wayne Lukas won the Princess in 2014 with Take Charge Brandi, who would later be honored with the Eclipse Award for champion 2-year-old filly that year.

“The Jackpot Day program has become one of the most important in the country each year,” said Steve Kuypers, Vice President and General Manager of Delta Downs Racetrack Casino & Hotel. “The event brings top notch horses, jockeys, trainers and horseplayers together for an afternoon of fierce competition and our team is ready to put on another great show this November.”